Want To Buy: A Placebo

A well-designed/performed, double-blind, randomized, placebo-controlled trial provides a high level of certainty about the effectiveness of an intervention. In scientific training, the need to utilize a placebo relative to your variable of interest is one of the first things you learn when designing an experiment. 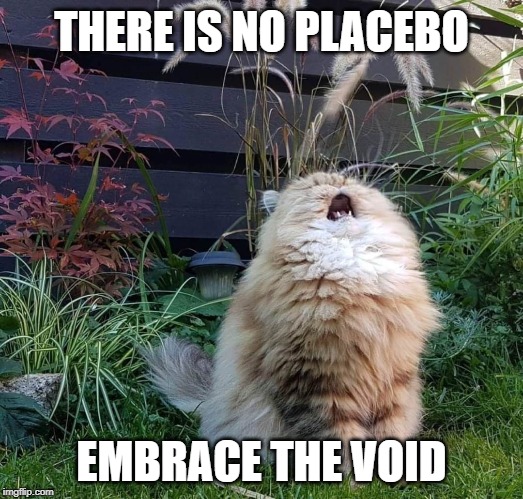 As many in the basic sciences and evidence-based medicine fields have become more interested in nutrition and its impact on health/biology (their interest is well-justified), there has been insufficient appreciation for the difficulty in performing nutrition research. This day 1 principle of "placebo-controlled" poses a particular challenge for many nutrition experiments: there is no placebo.

Consider an example that actually plagued causal inference in nutrition history:
It was known that feeding diets high in saturated fatty acids was associated with higher LDL. Does that mean that saturated fat raises LDL? How would you design a study to show that?

Okay cool, so we need to account for calories. How do we do that? Well, compare feeding saturated fat to an equivalent amount of calories from another macronutrient. So we take people, feed them both the same diets of 50% carbohydrate, 30% fat (33% SFA, 33% MUFA, 33%PUFA), 20% protein, 0% alcohol cause we hate fun, for a couple weeks, then we randomize them to either keep consuming the run-in diet, or we switch it up a bit, so that they're still eating the same overall macronutrient profile (%Carb,Fat,Protein the same), but now from that 30% fat diet, they're getting 10% SFA, 56% MUFA, and 33% PUFA. We see that those who consumed the higher saturated fat run in diet had higher cholesterol than those randomized to the high MUFA diet. Cool - so saturated fat does raise LDL, right?

Well, that's tough to say still. Do we know that saturated fat raises LDL, or does MUFA lower LDL? This is getting ridiculous, right?

Nutrition is high key annoying to study, in large part because we don't have a placebo for calorie-containing nutrients. With our LDL macronutrient example, it took decades of controlled feeding studies, carefully manipulating the amount and types of fat and carbohydrate and protein to finally come to the conclusion that saturated fats are LDL-raising, whereas MUFA and linoleate-rich PUFA are LDL-lowering, and starch/protein have little impact on LDL-levels unless they come with viscous fiber.
(side note/rant: this not only took tons of work, but also tons of well-funded feeding study centers ; if you want to make nutrition research better, advocate for better funding, not your favorite diet) 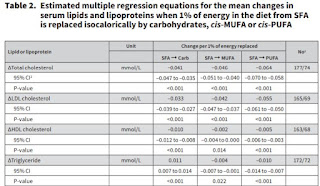 This lack of placebo makes designing calorie-containing nutrient studies pretty tough. But it makes food studies even more challenging. Most randomized controlled trials in nutrition only have funding for 2 arms, so what is the appropriate comparator arm for our commodity group (Dairy/Meat/Egg/Cereal) funded trials? The lack of a placebo has made food focused studies so easy to slant in the direction of whatever results you care about (compare anything to a high sugar/high refined carb/high satfat diet and you can make most foods look "good").

While the cholesterol example bore out through history and decades of research, the lack of a placebo in nutrition research continues to be a challenge for the interpretation of many areas of interest realted to diet. We've seen a large resurgence in interest in ketogenic diet studies in the rodent preclinical literature. Often (nearly always), these investigations compare a single ketogenic diet to a single chow group; if you've followed the reason thus far, you can guess where this is going: chow is not a placebo. These investigations are all too often mismatched for multiple nutrients (many with concomitant protein restriction, fat and fiber composition changes, in addition to being ketogenic); even when perfectly matched, the lack of a dose-response relationship impairs us from determining whether more modest changes in the CHO:Fat + Protein ratio would elicit similar effects, and whether the absolute increase in a specific fatty acid is causal. While these investigations suggest that something about the KD is uniquely interesting (sometimes good, sometimes bad), it's impossible to isolate the "ketogenicity" of the KD as the causal factor at play. Indeed, we've already seen where enthusiasm about the KD and FGF21 led to studies undertaken in humans (no effect), that better designed preclinical literature deemed to be likely due to the common protein restriction that occurs in the preclinical KD literature rather than a unique factor about the KD itself.

It's often annoying to investigators enthusiastic about their work to face this reality, particularly given the current funding situation. But rigorous mutli-arm studies are not impossible, and are the basis of the preclinical literature that underlies the one area of medical nutrition therapy where the ketogenic diet is widely medically indicated: epilepsy.  Preclinical researchers looking at the ketogenic diet in mouse models of seizure employed multi-arm designs, providing strong dose-response literature that highlighted the increasing ketogenic ratio (ratio of every gram of fat to combined gram of carbohydrate and protein) as the probable cause of the observed effects. The studies surely aren't perfect on their own (we'd love to see more comparisons of high ketogenic diet ratios with varied fat composition) but the whole body of literature strongly points towards the KD being unique and unlikely to be phenocopied with regard to its effect on seizure by simply moderate carbohydrate reduction and protein restriction, or the addition of a more modest amount of a specific fatty acid. 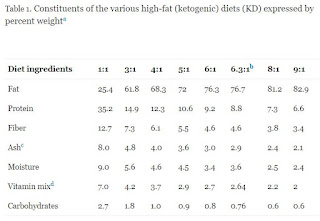 In Summary: read the nutrition literature, particularly that relating to whole foods, diet patterns or individual calorie-containing macronutrients, with caution. It's disappointing to look at a new study about the benefits/harms of XYZ diet and see that it was only compared to one other dietary intervention and immediately know it's being overhyped, but it's the reality of the situation. The lack of a placebo puts a damper on enthusiasm for what's in much of the literature sometimes, but strong causal inference is what's needed in nutrition, not more fanfare.

Despite what Void Kitty tells you, this isn't necessarily a reason for nihilism. The path forward is to 1) consider all of the interpretations of dietary components that may be causal in your reading of the literature; 2) interpret the impacts of interventions relative to their specific comparator arms and wait until the literature evolves enough to do the appropriate pairwise comparisons (like we have for lipoproteins). And advocate for better scientific funding so we can actually perform multi-arm diet studies in both the preclinical and clinical spaces.

P.S. I have studied both macro and micro nutrients in animal and human studies, and micronutrient studies are much easier to study because of the placebo issue; granted, dose-response relationships are still critical and there is a need for mutli-arm interventions.

Popular posts from this blog

Re: Gluten Free Diets are backed by Science

December 21, 2013
As I've written before on my posts at the-sage.org, I'm not against the paleo diet - it's backed by a really shallow understanding of evolutionary theory and desperately needs a name change (Unprocessed/antigrain isn't very sexy, I guess), but overall, I don't see a huge worry for nutritional deficiencies - depending on the strictness/vigilance, an individual might be low in calcium, iodine, manganese and vitamin E. From a clinical perspective, I'm more concerned with those consuming standard American diets. From a scientific perspective, I'm mostly concerned with religious evangelization of a dietary mantra posing as science.

I had a friend send me this link, claiming that gluten free diets are backed by 'real' science and asked me for my thoughts. For one, i'm familiar with Robb Wolfe, and generally like his and Matt LaLonde's call for a harder science approach to the Paleo movement. I am a big critic of the dietetics education standards,…
1 comment
Read more

RE: The Sugar Conspiracy

April 19, 2016
Note: this post is not brief and ideally requires a bit of pre-reading:

In Ian Leslie’s longform article, “The Sugar Conspiracy,” we get a look into the history of nutrition, and the suggestion that politics and  power dynamics play significant roles in the setting of dietary guidelines.

Leslie starts with a historical perspective, focusing on John Yudkin and his early hypotheses regarding sugar’s role in the aetiology of CVD.  Yudkin’s studies, Leslie says,are cast down by the nutrition elite (i.e. Ancel Keys) at the time, in favor of recommendations that suggested limiting fat/saturated fat/cholesterol as the major drivers of CVD.

At face value, the story is one of redemption: Yudkin’s cast aside theories are now being realized by modern crusaders like Robert Lustig. In the article, Leslie states: “These sharp fluctuations in Yudkin’s stock have had li…
4 comments
Read more